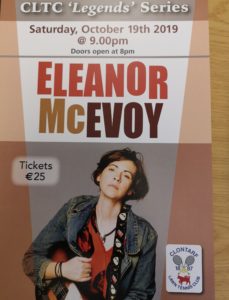 Tickets are €25 and are limited.

Eleanor McEvoy is one of Ireland’s most well known singer songwriters. She composed the song “Only A Woman’s Heart”, the title track of A Woman’s Heart, the best-selling Irish album in Irish history. She is also the Chairman of IMRO, the Irish Music Rights Organisation- the first woman to be elected. Upon finishing school she attended Trinity College, Dublin where she studied music by day and worked in pit orchestras and music clubs by night. McEvoy graduated from Trinity with an Honours Degree in music, and spent four months busking in New York City. In 1988, she was accepted into the RTÉ National Symphony Orchestra where she spent four years before leaving to concentrate on songwriting.

She built up a following in clubs in Dublin with her three piece band and during a solo date in July 1992, she performed a little-known, self-penned song, “Only a Woman’s Heart”. Mary Black was in the audience and invited her to add the track to an album of Irish female artists. The album was subsequently titled A Woman’s Heart and the track was released as the lead single.

The album A Woman’s Heart went on to sell over three-quarters of a million copies in Ireland alone and remains the biggest selling Irish album of all time. Eleanor signed to Geffen and toured all over the states with The Fugees, Fiona Apple and many more as well as garnering a US Billboard Top 10 charted single ‘Precious Little’. She was then invited to contribute to a number of movie and TV soundtracks. When Eleanor came back to Irish soil after extensive touring, she was awarded Best New Artist, Best New Performer, and Best Songwriter Awards by the Irish