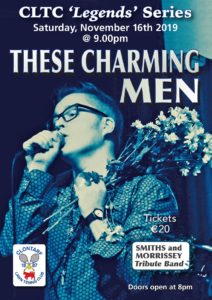 These Charming Men from Dublin, Ireland were formed in 1995 and to this day continue to charm fans of The Smiths and Morrissey all around the globe with their energetic and passionate live shows. They are classed as one of the premier Smiths and Morrissey tribute bands or acts around at the moment.

The Smiths were an English rock band formed in  Manchester in 1982. The group consisted of vocalist Morrissey, guitarist Johnny Marr, bassist Andy Rourke and drummer Mike Joyce. Critics have called them one of the most important bands to emerge from the British independent music scene of the 1980s. In 2002, NME named the Smiths “the artists to have had the most influence on the NME”. In 2003, four of the band’s albums appeared on Rolling Stone‘s list of the ” 500 Greatest Albums of All Time“.

These Charming Men have been performing at the Annual Smiths/Morrissey Convention in Los Angeles since 2001 and were requested to appear in Morrissey’s absence at the Fuji Rock Festival in Japan 2004 to play to an audience of some 35,000 people. They are a must for all Smiths and Morrissey fans. If you want a realistic and faithful representation of The Smiths or Morrissey, These Charming Men are your only option.