Want to improve your tennis but not sure that coaching is for you ? Increase your success rate. Improve your performance. Find the winning difference and feel more confident on court. It is generally accepted that most sports are 90% mental and 10% physical. Come and listen to what the experts have to say. 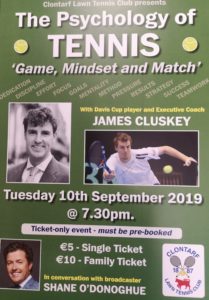 Tickets are on sale from the Office now and numbers are limited, so book early!!

Ireland’s renowned Tennis Pro James Cluskey, now an Executive Coach, has spent a lifetime delivering high performance. His achievements on the court had him represent Ireland in the Davis Cup from 2006-2015. As a tennis pro, James won 15 professional titles and was ranked 145 in the world.

From a young age, James learned and applied self-discipline, goal-orientated success and consistent high performance, both on the court and in training. In 2018, James and 3 others undertook the physically and mentally gruelling challenge of attempting to break the Guinness World Record for the longest doubles tennis match – over 60 hours. Despite physical fatigue, James’s sheer determination and winning mindset ensured that he succeeded in achieving his long-standing goal.

James captained the Louisiana State University Tennis Team to a Top 10 US ranking and, as veteran of the Irish Davis Cup team, he took on the role of mentoring new international team members. On retiring from professional tennis, James graduated with a Personal and Executive Coaching qualification. His other qualifications include a BA in Business and a Diploma in Sports Psychology.

Shane O’Donoghue is an international sports broadcaster, specializing in golf. A commentator with European Tour Productions, he has also hosted CNN International’s Living Golf Show for seven years transmitted to over 220 territories worldwide. He has covered every aspect of the game and travelled extensively to bring viewers unique content. Part of the FOX Sports Golf Team in the US for four seasons, he has anchored the live broadcasts of the US Open, and several USGA Championships. Prior to this, Shane was a member of BBC Television’s golf commentary team for seven seasons and also worked on RTE Radio and Television as a sports presenter.

A published author, Shane’s book ‘Legends in their Spare Time’, is a celebration of the golfing exploits of some of Ireland’s best amateurs.